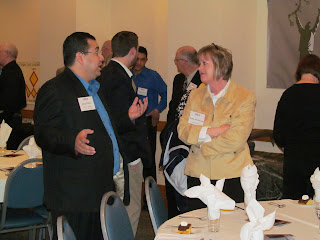 LaValley Industries was a winner of the IDEA Competition in 2010 for its DECKHAND® pipe handling system, The DECKHAND®. The Bemidji-based company has since partnered with Pipeline Machinery International, CRC-Evans Pipeline International, and Vermeer Corporation to distribute the DECKHAND worldwide. Since inventing the DECKHAND, LaValley has continued to grow the product line into other markets and is now a multiple patent holder.

By Northwest Minnesota Foundation - April 09, 2013
In an effort to further enhance the strong business presence in downtown Bemidji, the Downtown Development Authority (DDA) has established a new fund with the Northwest Minnesota Foundation (NMF) that will offer loans up to $5,000. The mission of the revolving loan program is to assist businesses in either locating downtown or expanding their downtown business.
The loans are available to any business looking to locate or expand in downtown Bemidji. “This is an excellent opportunity to increase awareness about the Downtown Development Authority and our important work,” said DDA President Ken Cobb. “We already have a great downtown, and we are always working to make it even better.  Our mission is to promote and enhance our vibrant downtown, and this loan program will encourage businesses to locate and expand here.”
Loans can be used for building improvements, equipment, inventory, supplies, and working capital. The business must maintain (DDA) membership throughout the term of the lo…
Post a Comment
Read more
More posts